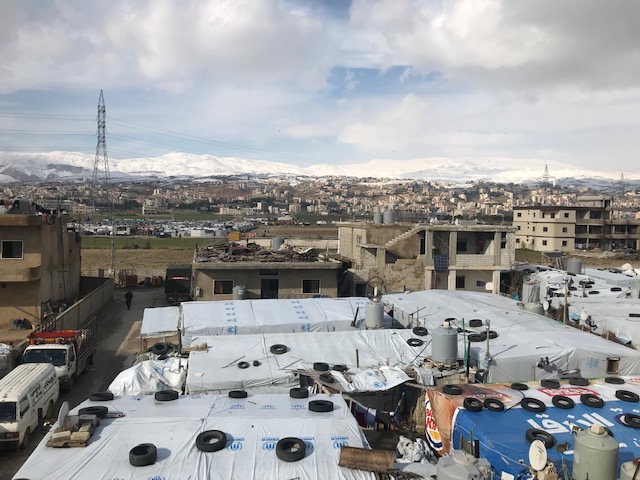 I am currently in Burundi checking on our projects in Gahararo, particularly our water project in the Batwa village of Gahararo.  Things are going well, but before I update you on Burundi, I want to continue my report on Lebanon.  There is still a great deal to say about the situation with the Syrian refugees living there.

I do not pretend to know much about the civil war in Syria.  I did not follow it very closely.  What I do know, however, is that millions of Syrians fled their country during the war and landed as refugees in Lebanon, Turkey, Iraq, and Jordan.  One of my contacts here, we’ll call him Ali, told me that there are anywhere between 1.5 million and 2.5 million Syrian refugees in Lebanon, depending on who you ask.  Ali (not his real name) is a Muslim born convert to Christianity who served as my guide the first day I went to Bekaa.  The second day I hired a driver.

The vast majority of refugees are housed in camps of anywhere from 500 to 1,500 people.  There are said to be about 2,000 camps in total.  They are scattered throughout the country with the heaviest concentration of camps being in the Bekaa Valley.  The UN helped Lebanon build the camps.  Each living unit is essentially a glorified tent but with four walls made of flimsy plywood and draped with a tarp bearing the UN’s logo.  (That is the only evidence of the UN’s involvement I have seen, which is a big surprise to me.  I thought I would see swarms of UN personnel and vehicles when I got to the camps.)  Each tent has a single room where the members of the family live together.  Only a few of the tents have furniture.  The floors are dirt.  I did not see any evidence of ventilation, but I did see evidence that people are building fires in their tents for warmth and cooking.  Smoke and lack of ventilation — not a good combination.

The conditions in the two camps I visited in the Bekaa Valley are bad.  It was very cold and it was apparent that people sleep directly on the dirt floors.  As I said in a previous email, there had been a huge storm only days before I arrived and the camps had been flooded.  There was still standing water in most of the tents.  I was shown pictures by a local man of people in their shelters wading around in up to a foot of water.  Because of all the flooding, many people had not been able to sleep for several days.

The camps house mainly women and children.  Many of the men stayed behind to fight for ISIS and many others were hunted down and killed by ISIS for not staying to fight!  In fact, although ISIS does not have a permanent base of operations in Lebanon, it still sends death squads and assassins in to Lebanon to conscript or kill the men who fled.  Hezbollah also attacks the camps periodically, because the Syrian refugees are Sunni Muslims whereas Hezbollah is a Shiite group.  The poor refugees are getting it from all sides.  And to top it off, the Lebanese army lacks the manpower and the funds to provide security, so the camps are vulnerable to attack.

One of the locals with whom I visited told me that rape is quite common in the camps.  The refugees are vulnerable, because there is no security to guard the camps from the bad guys.  The Lebanese police and military are stretched too thin.  So, thin, in fact, that even the heinous crime of rape is done systematically and with impunity.
The children I saw look healthy and happy.  They do not have a look about them of poverty, even though they are in fact very poor.  They are clean and well-groomed as are most of the adults.  No one appears to be malnourished or starving.  This is probably because the two camps I visited are being helped by local churches who are able to provide the refugees with clothes, some food, and occasional medical care.  I did, however, see some evidence of frostbite like we have seen in Mexico.

Most of the children attend school, although schools are highly impacted and grossly understaffed.  Let me give you an example.  I visited a school in Bekaa which was built by a Lebanese man who had a vision to provide basic education to the children of former Bedouins who had settled down in his town.  When it was built in 2007, the school had five classrooms as well as an office and a teacher’s lounge.  It was meant to host no more than about 75 students.

With the onslaught of refugee children starting in 2011, the once tiny school has grown.  In fact, there are currently 800 students attending the school in two shifts of 400 each!  While they have added nine classrooms, the teachers and staff are still completely overwhelmed.  There are sometimes thirty kids per class in classrooms that are small to begin with.  Some of the kids have to sit on the floor.  Resources are few as well.  I didn’t see more than a handful of books, I didn’t see school supplies, and I didn’t even see paper.  They have no computers, no AV equipment, and no field for the kids to run around and play.  Add to all that the fact that the physical facility is in a state of serious disrepair because of wear and tear.  I suspect the only reason they keep their accreditation with the government is that there is no room for the local public school to absorb 800 students!

I think I will stop here tonight.  I am reserving my opinions about what to do in Lebanon, if anything, and how to help, until I go back to Beirut on Sunday to spend the last four days of my trip.  I still have places to see, people to meet, and things to do in Lebanon before I can make any firm decision about how to proceed.

One final note. I was told that I should be very sparing and careful about the photos I take in the camps.  I don’t have too many photos from Bekaa Valley, but the ones I do have, including those below, were taken with permission.  In addition, I am changing the names of the people I am working with in Lebanon so as not to cause any problem for them.  One really has to be careful about taking pictures and using real names when working in the Middle East.