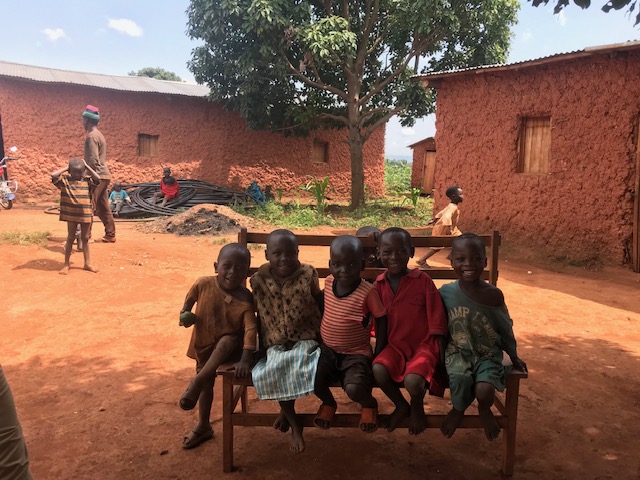 I have been in Burundi since Sunday afternoon.  My taxi picked me up at my hotel in Beirut at midnight.  I flew out of Beirut at 2:55 a.m. on a 4-hour flight to Addis Ababa, Ethiopia.  I spent four hours on layover in Addis and then flew three more hours to Bujumbura.  I arrived in Bujumbura at 2:00 pm.  I was picked up at the airport by the executive director of Harvest (our partner organization in Burundi), Donatien Ndagijimana.  We then picked up my translator, Cyrille Nitunga, and my friend, Aime Victor Kwizera, and off we went on a 3.5-hour drive north to Ngozi (not Gitega as I previously thought).  Ngozi is Burundi’s third largest city.  We arrived in Ngozi around 7 p.m.  The four of us ate dinner together and then went to our respective rooms.  I essentially passed out from exhaustion.

The next morning we met for breakfast in the hotel’s restaurant at 6:30 a.m.  We were on the road to Gahararo, the Batwa village we have been working with, by 7 am.  The drive to Gahararo from Ngozi was roughly three hours, about half of which was down a heavily rutted dirt road.  We reached Gahararo around 10:00 a.m.  We spent the next four hours in the village conducting our business there.

Our time in Gahararo was very productive.  We spent the whole time conducting individual interviews and focus groups with local government officials and Batwa leaders.  The upshot of it all is that the village is doing well and really starting to pull together to address the problems of their community.  The children, although shabbily dressed, looked healthy and happy, a big change compared to what they were like when we started working in Gahararo.  Back then; the children had constant respiratory infections and diarrheal illnesses.  Almost all of them had worms.  Many of them were obviously malnourished, and some were outright starving.  Malaria was prevalent.  The infant mortality rate was a staggering three children per month and the life expectancy was 27 years.

All that appears to have changed now that we have given the community decent housing, mosquito nets, access to clean water, a porridge program for the children, and subsidized medical care.  The infant mortality rate has dropped dramatically to a total of five deceased children in the last three years. Malaria rates have dropped dramatically, as has the number of intestinal illnesses experienced by the villagers.  The children no longer have snot dripping down from their noses and they are not covered in flies.  Not one person complained to me that their child was sick.  No one begged.  That last one — no begging — is huge.  People from surrounding Hutu and Tutsi villages often start to beg when they see me coming.  The fact that the Batwa no longer have to beg gives them a kind of status they have never experienced before.  The fact that they don’t paw at me makes me feel safer as well.

The villagers are coming around to trust me.  They were very comfortable around me, a big change from when I first started going to the village.  There were more men there this time, and they were definitely more comfortable talking to me than they were at first.  I have even become someone the officials of the local government recognize.  They help me secure fast permission to move freely around the Burundian state in which Gahararo is located.  One person knew me by name.  It was definitely the most enjoyable visit to Gahararo that I can remember.

So, all is well in Gahararo.  The water project is in good shape with all seven taps flowing.  We have a plan for addressing the kinks in the system.   We are still hoping to build a church soon, but Pastor Jeff did not work out.  We are searching for a different pastor to partner with in Gahararo.  In fact, please pray that God will lead us to a pastor who feels called to work with the Batwa.

Another bit of news about Gahararo.  The village is in an area with a substantial population of Muslims.  When we started working there, many residents of Gahararo were Muslims.  The rest were Animists.  Today, the village is predominantly Christian.  The villagers are very excited about the prospect of having a church near their homes.  I told them that before we build a church we have to finish working out the kinks with the water system and find a pastor with a heart for the Batwa.  They told me they understood.

By the way, Muslims and Christians in Burundi generally live together in harmony.  It is not always so in the Middle East or in other parts of Africa.  Religious discord does not appear to be present in Burundi at this time.  That is something we should all be thankful for.