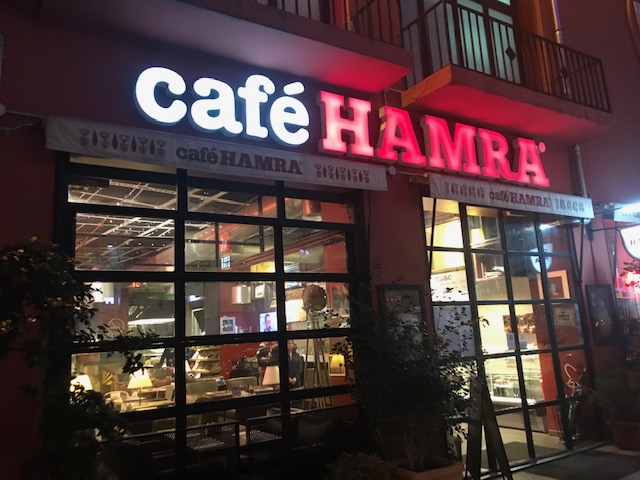 Before I write about the people I’ve met inside and outside the refugee camps, I think it’s worthwhile to spend an installment telling you a little about modern day Beirut.  If you have not had the good fortune to visit this city, I’m sure what you are about to read will be surprising and will challenge your preconceived beliefs about what it must be like in this wonderful city.  I want you to know that I feel perfectly safe when I am inside the city. In fact, I feel just as safe in Beirut as I do in any large American city.

Beirut is a beautiful city with an ideal, California-like climate.  It is a port city situated on the banks of the Mediterranean Sea.  It was a stronghold for the powerful Phoenicians for hundreds if not thousands of years and has been a seafaring city since its earliest days.  Although the city bears obvious scars from the 15-year civil war (1975-1990) and the 2006 war and periodic skirmishes with Israel, it has largely regained its status as the Paris of the Middle East.  Although it is built on top of an ancient city, the best words I can find to describe it today are modern, cosmopolitan, civilized, and cultured.  It is the most significant place for higher education in the Middle East, except for Cairo, and hosts the American University of Beirut, one of the world’s great Universities.  Late night cafes where students and faculty congregate to discuss philosophy, religion, and current events abound.  Many Lebanese in Beirut, and even outside Beirut, speak English and merchants accept dollars, just as Mexican merchants accept dollars in Baja.  Although some of the store and restaurant workers seem indifferent to you and maybe even surly, it’s not a dislike of Americans that drives them.  It’s just that common bad attitude too often present in big cities around the world.  I am finding that the Lebanese like Americans.  No one gives me a second look.  Maybe my ever-present Angry Arab scowl, as Barb calls it, or my crooked nose makes them think I’m a native, but I feel perfectly comfortable here.

The fact that there are deep religious and sectarian divisions in the country is not visible to the outsider visiting Beirut.  You see very few clerics — Christian or Muslim — and very few Lebanese Muslims wearing traditional Muslim garb.  Except for Hezbollah supporters in the southern suburbs of the city and in the Bekaa Valley, I have not seen a single woman wearing a burqa and only a few wearing a hijab.  Some women wear a modest headscarf in deference to their religiously conservative parents and grandparents, but the clear majority of women (and men) dress entirely in a western way.  And the clothing they wear is stylish, akin to the styles worn in New York and Europe.  All the major European designers and many American ones have shops here on Beirut’s equivalent of Rodeo Drive.

It’s not what I expected at all, although memories are coming back to me of my childhood visits here, including my last one with my father in 1975.  That visit was in July and we stayed at the beautiful Phoenicia Hotel in the city center.  In October of that year, the civil war started with lethal attacks on that hotel and the St. George Hotel.  The Phoenicia Hotel has regained its stature as one of the city’s leading hotels.  I don’t know about the St. George.

Beirut is considered the Paris of the Middle East because of its fashion, its food, and its opportunities for fun.  I have already said a word about fashion.  As to food, some people say that Beirut’s food scene is as good or better than that of Paris.  Like Paris, however, it’s expensive to eat here.  You will definitely spend more in a good restaurant here than you would in a comparable restaurant at home by a factor of at least 25%.  True, if you look hard or know a local, you can find excellent food that is cheaper than the same quality meal at home (like the Taouk plate shown below, for which I paid $5 including a drink).  It remains the general rule, however, that good restaurants are very expensive.

One of the biggest surprises to me has been Beirut’s active (understatement) nightlife scene.  I haven’t participated, but I’ve read about it and observed it from my hotel room.  Let me give you an example.  There is a Lebanese pub across the street from my hotel.  They have booze, food, music, and hookah.  Last night — Thursday — it was relatively peaceful until around 11 pm when things started to get really loud.  I looked outside and saw that the tables, bar, and hookah lounge were all packed and there was a line out the door.  The same was true with the several other night spots near the pub.  I looked around and could see that the retail stores in the area were still open as well.  At that time, there was extremely loud Arabic music coming from the pub — I think it was Umm Khalthum, a very famous Arab songstress as renowned in the Arab world as Frank Sinatra is in the West — and the patrons were singing along LOUDLY.  Some were dancing too.  This went on until 2 a.m. when the Arabic music stopped and things quieted down somewhat.  I thought that was it, that people would be heading home at that point, but what I thought was the end of the night was really just the beginning.  (Oh, I forgot to mention that there were little children running around the pub during all this.  Beirut is a safe city and so some patrons of the pub just let their kids run around on the sidewalk in front of the pub while they ate, drank, and socialized.  I am telling the honest truth!)

At 2 a.m., when I thought the loud night was winding down, who comes over the speakers at full blast?  Snoop Dogg!  I’m sure it was not live Snoop Dogg.  I would have thrown on clothes and headed over there if I thought it was the real Snoop, as I love the Dogg.  Anyway, Snoop goes on until 4 a.m., I kid you not!  Mind you, I woke from my half sleep state at 3 a.m. to look out the window and I can tell you for sure that the restaurant was still PACKED and the children were still running around the place and on the sidewalk outside.

So, Snoop finally stops at 4 a.m. and I think again to myself, Thank God!  It’s over!  But it was not to be.  At that time, Umm Khalthum returned and went on for another two hours, until 6 a.m., again with much LOUD singing, dancing, and hookah!  I think last call for alcohol was at 3 a.m.  However, they were still serving food at four when Umm Khalthum came back for her two-hour encore. Finally, at 6 a.m. the crowd started to disperse and things started to quiet down, except for the traffic noise which is basically present 24/7.  At that point, I stopped spying on the craziness, got back in bed, and fell asleep.  Unfortunately, my alarm went off at 6:45 a.m.!

What blows me away is that I’m not even staying in the district known for the heaviest partying.  There are at least two others that have much hotter night life than Hamra where I am.

I haven’t spent much time in NYC, but I imagine Beirut to be very much like that.  Tonight, Saturday night, is supposed to be the biggest party night of the week.  I guess I don’t need to worry about the noise too much, because I have to leave for the airport at midnight to catch my 2:55 a.m. flight to Burundi.  I’ll just have to sleep on the plane and in Addis Ababa during my long layover.

I am staying at a beautiful hotel in the Hamra District of the city.  It’s only $60 per night.  I was wondering why it is so affordable.  Its guests can’t get any sleep! Between Umm Khalthum and Snoop Dogg you’re up all night!

Let me just say a little bit more about Beirut.  Immediately to the East of the city are the foothills of Lebanon’s coastal mountain range.  They rise to a maximum height of about 10,000 feet and receive snowfall annually.  There are five ski resorts in Lebanon.  The skiing is not world class and the season is short, but it’s good skiing nonetheless — akin to Big Bear — and within an hour or two hours of Beirut.  The resorts are usually only open for two months per year as the snow doesn’t last.  However, this year Lebanon is experiencing massive amounts of snow and ski resort owners are hoping for a three or four-month season.  In fact, Lebanon had an epic storm that only ended the day I arrived and they are expecting another huge storm tomorrow night through Thursday or Friday of next week while I am in Burundi.


To get to Bekaa, you have to go over the coastal range, which was made difficult by all the accumulated snow.   As far as I can tell, no one has chains, so we had to wait for the road ice to thaw in the morning before we could drive and we had to return to Beirut before the ice reformed in the evening.  Chtaura is only 45 miles from Beirut, but it took us two hours to get there and two hours to get back to Beirut.